Omega introduced the Planet Ocean “Deep Black” Replica, offering a GMT dive watch in an all black ceramic construction. Building on that concept, we’re now getting the Planet Ocean “Big Blue,” a nearly identical watch that opts for rich blue ceramic instead of black, with bright orange accents and a movement that shows off Omega’s technical prowess. 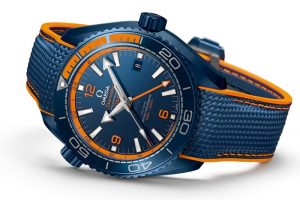 The Planet Ocean “Big Blue” is, as the name suggests, as big watch. The Fake Omega Watches  measures 45.5mm across and 17.8mm thick. With that size though, you get 600m of water resistance and the end result isn’t as heavy as it looks due to the ceramic build. There are two 18k white gold broad arrow hands for the hours and minutes, a pointed seconds hand with an orange tip, and a long orange arrow hand for the GMT function. 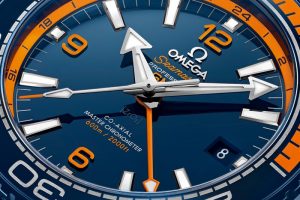 While on some level this might be a brash dive watch, the details are handled extremely well and the Omega Replica Watches Swiss Movement gets better the closer you look. Just below the center posts for the hands you can see the chemical symbol for zirconium dioxide, the type of ceramic from which the dial and case are constructed, but in a tonal color so it doesn’t stand out too much. Likewise, the date window is blue and matches the dial quite closely so it’s not loud. The bezel is actually made of three materials – ceramic, liquid metal, and rubber for the main insert, numerals and markings, and orange track, respectively. The crown is positioned at three o’clock, while at 10 o’clock there is a helium escape valve. 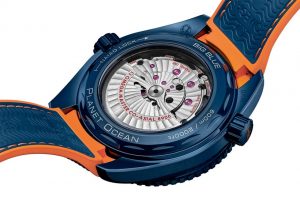 Through the back, you can see the Best Omega Replica Watches Review, which is an automatic co-axial movement. The 8906 is also resistant to 15,000 gauss of magnetism and the “Big Blue” carries the Master Chronometer certification, created by Omega in partnership with METAS. Finishing is nice, with bright striping and large jewels giving it some shine. You’ll also notice on the caseback that the watch is sealed with the patented Naiad locking system that keeps the lettering aligned perfectly. The watch comes on a blue rubber strap with orange stitching and a blue ceramic folding clasp that matches the case. 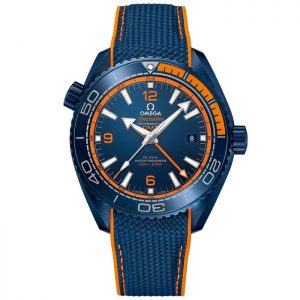